I always bother myself with the thought that many of my students won't be able to go to college. I believe that their disabilities are a culprit, but I wanted to know if there are other factors that aggravate the situation.

In one of my online moments, I bumped into a research conducted by California Tech PhD student Virgil Griffith. He collected favorite music of college students using their universities' Network Statistics page on Facebook. Then he looked at the average SAT/ACT score from CollegeBoard for students attending every college. Critics of the study claim that it is 'unscientific' because of the method and the source (Facebook), but I found it to be an essential source of understanding of how my students behave, what kinds of music they listen to, and the effect of this music in their struggle toward educational success. 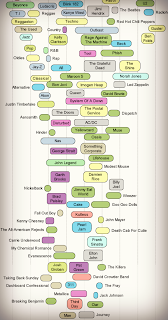 In the study, Griffith included 133 most favorite music that appeared on Facebook and considered a variety of genre, including Hip Hop, R & B, Christian, Emo, Jazz, Pop, Alternative, Rock, Country, Metal, Classic Rock, and Indie. Then he correlated musical tastes of students with SAT scores. In the end, he generated a result which he calls "dumbitude" and "smartitude".

The study showed that students who listen to Beethoven type of music demonstrated the highest scores while those who voted Li'l Wayne music as their favorite registered the lowest.

According to the Wall Street Journal, there are interesting discoveries [in Griffith's research] that merit our attention:

What's in Li'l Wayne's music? Typically, his hip hop music contains contractions, new words that are never found in any circulated dictionary, profanity, alcohol, drugs, and sex. For the younger audience, this is not only a threat. It can establish a vicious cycle that leads to stagnation.

What is its implication to education? Students' habits of listening to their preferred music can significantly affect their journey to educational success.

I find it ridiculous to think that classroom teachers can twist an existing reality about students' music preferences. However, for teachers in the primary and intermediate grades, there is still something that could be done. Here are my takeaways: