The Dark (K)Night Has Risen -- Will You Blame Batman? 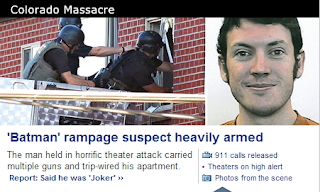 When I was a child, just like anyone else my age, Batman became part of my rich imagination. In my days, the Batman movies were simple and naive. My maximum satisfaction was met simply by looking at Batman flying and defeating his enemies, notably Joker.

Nowadays, I am more preoccupied with other issues in life. Although I am still fond of the superheroes who would spend so much time planning on how to save humanity, I am no longer inspired to look forward to latest movie releases. This younger generation calls the new releases a work of art, innovation, and a product of 'postmodern' creative imagination. Much of the way the movies are produced go beyond what I can consider to be classical. In my opinion, they are supra-violent, something that my nine-year old child will never be able to watch without convincing us to the extreme.

Last night, a consequence of what has been viewed to be 'creative' and 'innovative' has finally happened. In a Colorado screening of Batman: The Dark Knight rises, a tale of a hero with a pure heart, turned unusually into horror. A gunman -- a 24-year old PhD student who graduated with the highest honors at University of California-Riverside, claimed the lives of 12 innocent fans and wounded 60+ others. This happened at a time long before Batman and Joker ever met halfway in the story.

According to CNN report (cnn.com), James entered the movie house in full tactical gear, something any unsuspecting fan would never consider as a threat. In the United States, after all, fans resorting to these forms of 'idolatry' are a commonplace.

But what scares me is his academic profile. My first impression is, here we go again. Has his scholarship given way to depression? Has it led to insanity? Or does he carry an explicit plan to annihilate the 200 moviegoers at that point? Why?

The police investigators said that when he was being questioned about his involvement in the incident, he simply replied: "I am Joker."

Is Batman guilty of this crime of the century?

This post is a taste of what could become one of the most high profile crimes of the century in the United States. Just like anyone who cares for those who were affected, and those who are puzzled by the mysterious crime, I am all ears in the development of the issue. I will write my share of opinion on this issue in the days to come.