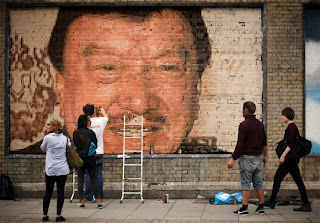 In the eyes of several generations of Filipinos, Dolphy is the comedy icon. He made my grandfather, my father, and myself, realize that there are few celebrities in Philippine show business who could establish a name with great dignity and respect.

He carried a variety of aliases in several generations: John Porontong, Facifica Falayfay, Kevin Kosme, Father Jejemon, and many more. However, to an ordinary production assistant or movie crew (or probably the common 'tao'), he is known simply as Mang Dolphy.

He made my father cry; he cried because of uncontrollable laughter. He has thrown comic strips that are still being used by today's promising comedy novices. Truly, Dolphy has made us realize that 'laughter is the best medicine.'

I started appreciating him during the John en Marsha days. Just like in real life, he has carried the dreams of an ideal father. But he was always lambasted by his mother-in-law (Dely Atay-atayan) because of his poverty. Hence, the closing line, "Kaya ikaw John, magsumikap ka!"

Over the years, I grew with him on one of the longest running TV sitcoms 'Home Along da Riles' (Home Along the Railroad). He was truly a part of our household. And it was always Christmas in our hearts!

There was never in the Filipino spirit that he denied providing happiness through laughter. However, as the classic song goes, "all good things never last."

We will not weep because he didn't like it. Instead, we need to be happy in order to sustain the happiness that he left in us. Today is the end of an era; the rest is history.

Goodbye, Mang Dolphy. Thank you for making us happy.