The school year has finally come to its end in NC. After the raging state tests, kids are now preparing for a long break. Books have been stacked for a while. Classrooms were shut for overhauling. Schools will start to hear the sound of silence temporarily again. 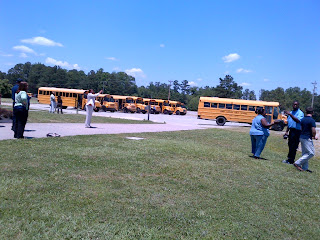 Will there be another school year for the rest of America? Certainly, but not all schools will re-open in the next school year. The effect of global recession has caused a number of counties and independent school districts to tighten budget. State employees received -- not bonuses for a job-well-done -- but salary deductions. Some schools are closing permanently while others are merging. Even groupings are affected. The traditional K-5, middle, and high school groupings are under threat. Staff and administrators will lose their jobs while others might assume relatively unstable positions. At the very edge are international teachers, both H and J visa holders, who will sacrifice their most sought-after jobs. Some Filipino, Jamaican and African VIF friends are now returning home for good.

What happens to the kids? America loves them. They will still be there. Resources, no matter how limited, will be poured in order to bring out the best education Uncle Sam's grandchildren deserve.

No one knows when the economic crisis will end, but for struggling OFWs in a land, used to be, of milk and honey, life must go on...

Note: In our District's experience, the same scenario prevails in 2012. At least 12 certified positions are going to be removed (which means 12 breadwinners will lose their job). This is due to the enforcement of Reduction in Force (RIF) policy. Who says recession is over?