Filipino culture is rich in traditions during Lenten Season. Some of them are so unusual that the universities feast on their discourses. Folk Catholicism and Split Christianity are two of the themes that still run in the blood of this modern generation. 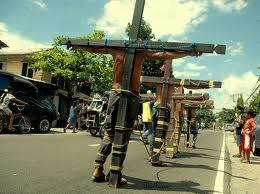 Just like Andrew Zimmern's introduction to "balut" in his outrageously popular TV show 'Bizarre Foods,' many guests in the country during this time of the year are bewildered why some Filipino locals are flagellating using locally made instruments involving blades and shattered glass, and submitting themselves to real crucifixion. It is also worth-wondering for the on-lookers of Filipino culture to see people flocking to allegedly miraculous mountains, or sacrificing miles of barefooted procession to shrines in order to receive graces and blessings.

This Lenten season is an unusual time of waiting for me because I have been away from my long-lost cultural traditions for years now. In a country where the only preoccupation is hard work, it makes me nostalgic when anticipating this time of the year.

During my last few years in the Philippines, my family established a yearly tradition of Maundy Thursday 'Visita Iglesia' covering 14 historic churches within the cities of Mandaluyong, Makati, Manila, and Quezon. Although it is a time of sacrifice through fasting and abstinence, as a conclusion, we would normally reward ourselves with a sumptuous mirienda cena and a bowl of mixed-flavored ice cream and milk-enriched, crispy barquillos at the Nestle-Magnolia Ice Cream plant in Quezon City. LOL!

This time of the year calls for reflection, and it also relives a rich tradition of people, who, no matter how misunderstood, will perpetuate as long as we are willing to treasure it.