This post is not a reaction coming from the Iskolar ng Bayan in me. This is just an anticipation of what a world would be in an era of cyberspace domination and counter-domination. 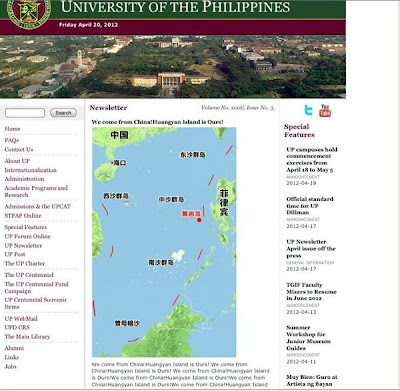 Last Friday, 4/20/12, Manila standard time, the University of the Philippines website was hacked. Obviously the hackers came from the mainland, a superpower in their own rights. The reason? The much-coveted Panatag (Scarborough) Shoal -- a small piece of land within the Philippine territory.

The hacking left a mark in the minds of innocent UP students, alumni and guests whose only interest was to seek for updates about what is going on in the Peyups nation. Too bad. Had the site been incentivized, the hackers would have gotten something to bring to their families. Lol.

What's in the UP website that became the target of hacks from China? If one visits www.up.edu.ph, all that they can get are news and updates that are important to the lives of the University of the Philippines community. Aside from those updates and news, there is nothing there -- not even a Paypal button that contains millions of pesos. Lol!

But why was it the target of hacks? (kulit ng tanong...)

It clearly indicates how two countries are politically affected by a claim over a small territory. My question in mind right now is this: what is in Scarborough Shoal that makes China die for it? This is an interesting area to look at.

Going back to hacks, this recent takeover of the UP website that was posted with the map of South China Sea and a caption "We come from China! Huangyan Island is Ours!" only indicates that attempts for political domination have penetrated the cyberspace. What does it mean to us ordinary citizens? We have to take every measure to be careful.

But wait! The story doesn't end there.